Looking to start an exciting project?

The platform for digital vehicle history

Patina is the digital platform for car history, helping users to preserve and enhance the history of their cars in a secure digital record. Initially available on mobile only, we were asked to design and develop a web platform that allowed the viewing of content shared from mobile devices. Since this first web release, Jump have been totally responsible for the Patina web platform, developing it into an app that is used globally by tens of thousands of car enthusiasts.

Designing with the user in mind

For version 2 of Patina, we looked at how the site had been used since its release in early 2014 and spoke to users about any improvements/pitfalls that they had experienced whilst using the site. From the feedback we collected we found that the target users of Patina needed a more streamlined way to add records as they used it more as an online “record keeper” rather than using it to browse other vehicles.

We started with user flows and wireframes to iron out any previous issues users had experienced with the site in order to make using of the site more enjoyable. After the initial wireframes and user flows, we moved on to creating detailed visuals; concentrating on making the experience more focused on allowing the user to easily manage and maintain the digital history of their vehicle. For the detailed visuals we used a card based approach, giving the site a more web app feel, and adding clarity and emphasis on key information. We focused more on making the users records and details more accessible from anywhere on the site, enabling users to quickly edit/add records on which ever page they were on.

Patina is built on a Laravel Framework giving us great base to start the platform on. The data from both the web platform and iOS app is being stored in Parse a NoSQL cloud solution, using Parse allowed us to quickly roll out user authentication and record level ACL to make sure the platform is not only secure but the records a user creates and wants to remain private do remain private.

Parse has a number of SDKs that could be used, for V1 of the application we decided to use the PHP SDK, this would allow use to make server side calls to the API to retrieve the data we require as well as making user updates securely. As well as using Parse for the data store we also took advantage of a number of the other features that Parse offers such as Parse Push which we used to send push notifications to users on iOS devices that signed up for vehicle notifications.

As Patina is a asset heavy application we wanted to make sure that the users experience wasn’t hindered when they wanted to upload multiple images or large video files so we made use of the queue integrations that Laravel has and used Iron.IO to handle the queue system this meant that a user could upload a large amount of images to the system and not have to wait while the multiple image sizes required for the site are being created the platform would let them know when the records have all been added.

The web application is built using Laravel 4 with a number of PHP packages. We decided to take this route as it gave us the greatest flexibility going forward to not only built the web application itself but to open up certain areas of the site as API endpoints which would then allow us to process certain tasks that a user might need doing and not to keep them waiting.

For version 2 of Patina, we looked at how the site had been used since its release in early 2014 and spoke to users about any improvements/pitfalls that they had experienced whilst using the site. From the feedback we collected we found that the target users of Patina needed a more streamlined way to add records as they used it more as an online “record keeper” rather than using it to browse other vehicles. 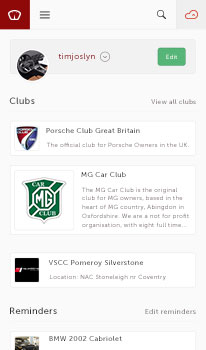 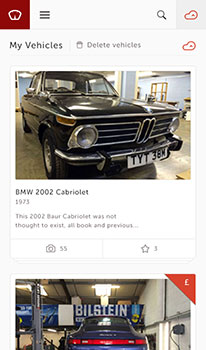 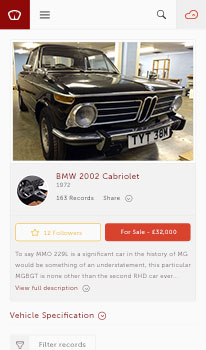 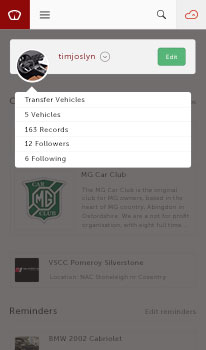 Platforms we develop for